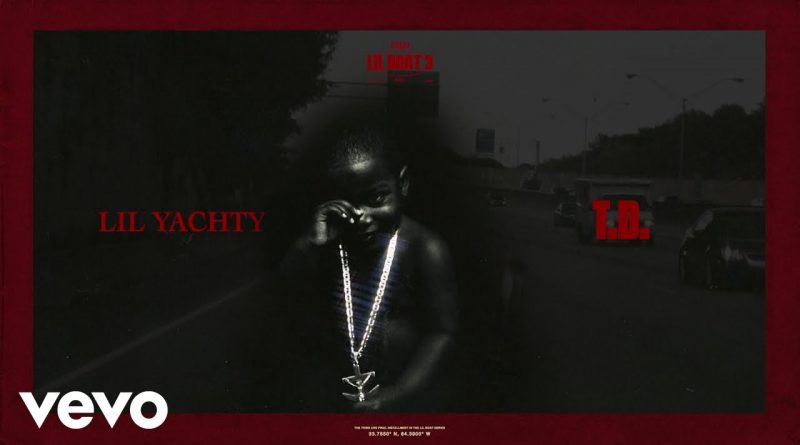 Woah
I’m in this bitch like ayy, damn
I’m in this bitch like ayy
I’m in this bitch like ayy (Lil Boat)
I’m in this bitch like ayy
I’m in his bitch like ayy
I’ma need me a minute before I walk in, ayy
I’ma need me a bitch before it turn ten, uh
I’ma need me a front and backend, all cash stacked in
Rappin’ around town and I’m downtown
Big boy gat, I don’t back down
Talkin’ big shit, I got a sack now
Fuckin’ bad bitches, I’ll blow a bitch back now (Fuck)
Woah
I’m in this bitch like ayy, damn
I’m in this bitch like ayy
I’m in this bitch like ayy (Lil Boat)
I’m in this bitch like ayy
I’m in his bitch like ayy (Uh, I’m in his bitch)
Back to the bando
I Tokyo Drift like the sample
When shit wasn’t sweet and so simple
When it was just churches and candles
We ain’t have no Turks and no Caicos (Nah)
No fresh pedicure for the sandals (Nah)
We learned how to pedal, no handles
Back when we traveled,  we trapped and we peddled right front of the Santos (Uh)
Like who wanna match? I’m runnin’ the maps
I run it like laps, they runnin’ in last
I might overlap and won’t double back ’cause my past is my past
They all from my path and part on my back
She wanted a bag, wanted some Raf
Mines came with a name, hers came with some change
We want the same thing, let’s not get offtrack (Yeah, uh, uh)
I’m up in that bitch skatin’ (Skatin’)
My wrist alone is the Ritz, I’m sayin’ (Bling)
Super Saiyan blonde, her lacefront on (Uh)
Nigga, don’t make me wait too long (Yeah)
Flippin’ rates of that Grey Poupon
I play you food for all
My bitch watch VH-1, first sixty days, RuPaul
She been around Tyler way too long
Um
It’s young T and he be that boy
I talk death, but I don’t like guns
I talk love, but I don’t got none
They talk charts, but they don’t got one
You got a stage, then it’s one-point-one for one hour
Niggas came second to me, they so sour
Had a slow climb, that’s why they all doubt ’em
And still came out on top, now that’s power (Uh)
Fuck they respect, I won’t miss a step, I won’t intercept
The tip of my tongue, I still got my soul and still got the check like
Bling, bling, bitch, I feel like Juvie
Raw as fuck, bitch, I feel like sushi
Watch Blank Face and feel like Groovy
Neck lookin’ like a thot in labor
But it’s goin’ up like it’s an escalator
Boys goin’ down like Titanic sailor
Yachty here and him from Decatur
Flacko freer than a Costco plate of them samples, nigga
I’m ample, huh
When that suit come on, I throw a tantrum (Hoo)
That’s Igor, Igor, he a hot potato
Y’all small fries for example, nigga, um
Don’t run with the ride-a-long, nigga
I’m a catalog, I’m a human Adderall
Little ass bitch, nah, you ain’t in my category
Unicorn rare, better put a saddle on, nigga
Y’all rappity-rap, y’all critically ‘claimed, they gassin’ you up
I went to your show and took little nap (Trash)
That’s why we not in the same bracket of tax
I’m that nigga, bitch
I did it all with the passion, I’m a god in this fashion
Niggas tryna fit in with their arms in the jacket (Ugh)
Had to pull myself together like it’s all elastic
Got the heart of a dragon, I’m a star, call me Patrick
Heard the bitch was talkin’ shit, so I caught him in traffic
I’m the type to walk in your house and shit on your mattress
(Slow down, you’re spitting everywhere), ugh
I’m good, you could take it all away (Yeah)
I’m God, you follow me ’cause I know the way (God)
I’m in Philly and we all fly (Huh)
If we don’t got the whip, we do the walk-by (Yee)
On your new picture, we archive (Ugh)
If we cross paths, leave you cross-eyed
Had to slap a bitch, chose the wrong side (Ooh)
Mob ties, bitch, you get hog-tied, you chose the wrong side
Mrs. Whack, I love your flow, nobody rhymin’ like that
Had to clean out my trunk to put your mom in the back
The cops pulled me over, they don’t know your mom in the back
Big Whack makin’ niggas take herbal and naps
These hoes can’t rap, they need a permanent pack
I ain’t fuckin’ with you boys, need the cervical cap
Okay, I’m bored
Okay, I’m tired
Sleepy, huh
Yeah, I don’t wanna be like nobody else (Else)
Lookin’ so good, I might rob myself (Self)
Realize I gotta hide the wealth (Wealth)
Told bro it’s okay to be rich and stealth (Yee)
Twenty-two, I might go fuck a MILF (MILF)
My twin assistants both white as milk (Milk)
Maybach, inside came soft as silk (Silk)
Put a bitch on the molly, now she tilt
This bitch been killed, built like a crushed can
Makin’ rap friends more sketch than a white van
Billionaire Boat, more freedom than a white man
Fuckin’ on a bitch and she sound like a hype man
Lookin’ for a fly nigga, I’m what you type in (Go)
Been counted out since I could count (Yes)
Got a public and a private account (Yes)

For my bank and not my Insta’, bitch

For the Latest songs lyrics of Punjabi songs, Hindi Songs and English stay connected with LyricsVin.