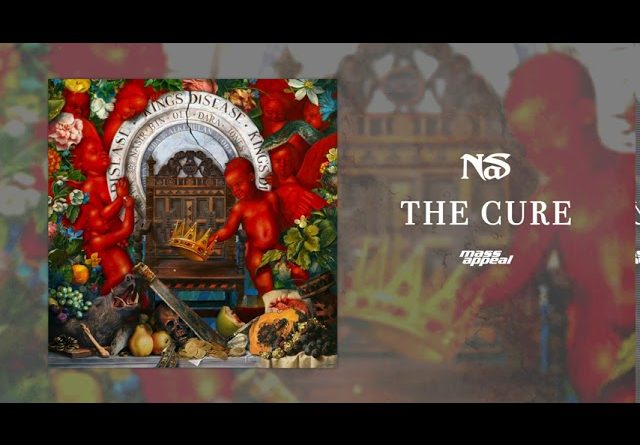 The Cure is the latest song released by Nas. The Cure is from latest album named King’s Disease

Too many changes, you changed from your greatness
Become a byproduct of yourself all for the paper regardless
The markets see you as a old-ass artist
The McCartneys live past the Lennons, but Lennon’s the hardest
Stay on your path, stay on your craft
They just want you to switch your lanes up so they can hate on your ass
What’s in a name? What’s in a name? Suffering and pain
Guts, blood, and tears, aim straight, game face, king’s grace
I came in this thinkin’ you was gon’ be this great thing
‘Cause I seen the greats do it with a great queen
What these kings have in common? They had women who solid
Malcolm needed Betty, I met some queens who wasn’t ready
They envy the unhappiness of the greats
They don’t have a fulfilled life yet, so they searchin’ for ways
To feel what Sam felt, play the hand Marvin was dealt
A Vandross, here’s the cure, the antidote
A thousand milligrams, make sure you don’t overdose
Turned to a businessman, used to serve ’em in the cold
Cold gang, don’t get exposed, stories get told
You glamorize the game, it ain’t a glorious road
Rest in peace Kobe and Nip, that’s off the rip
King shit, if it ain’t about fam, it don’t mean shit
The cure, love all the allure
Donuts rotten, the phone tapped, tappin’ in with Lord
Roll the credits
Cuban link QB chain belong in the MOMA
So boomerang, you salute my twenty-seven summers
Rolls-Royce Brigade just ’cause it go with the moment
Pac saw the chain, got his medallion, I won’t
Insinuate imitation ’cause I copied his stomach
Kings honor kings, straight from my pops to my son’s shit
Steak tartare bloody, mercury levels from raw fish
Sushi for lunch, waiter at the table, the cork twist
I’m studied like a book by many
They give me looks of envy, I took the Bentley
White chick like Liz Taylor might get the Bentayga
On my Rick James behavior
Life is school for the soul and I’m in life seven already
Life’s simple but heavy, incomprehensible shit
Everything from sexy to deadly, I done been through that shit
Still goin’ deeper like I grew a new inch on my dick
We looked at robbin’ as a way of resolving our problems
My moms cooked food, but some of my niggas was starving
And whatever they was down to do, I was with ’em regardless
Turns out I was hungry and was hittin’ the hardest
The scissor was sharper, my predictions was on it
No fortune teller, just going off regular signs
Niggas often tell ya they moves
Without a word, just reading they mind
Wasn’t needin’ no nine
Corner executive born in ghetto hell
Where metal yell especially over necklaces
Life lessons is karma
Whatever you dish out come back as blessings or to haunt ya
Could miss your kids and hit your grandkids for your dishonor
That’s generational curses, they said they want the old Nas back
Play the Clue tapes for old verses
Messin’ my homies’ lives up, sayin’ Nas will rise ’em up
Like they wasn’t live enough, many lives I’ve touched
Can I get a witness?
Can I get a witness?
I need a witness, drinkin’ three at night on some Bridge shit
Wearin’ shorts and Timbs, summer night on some Bridge shit
Party with gangsters, gettin’ right on some Bridge shit (Yeah)
Like MC Shan and Marley, I be on some Bridge shit
Yeah
Like Jabari, I’m on some Bridge shit
Shooter live on
Kings live forever
Yeah
We go through a lot
And nobody wanna hear about what we go through
And that’s cool too
Every man go through the same Mondays and Fridays
Same sun, moon, and stars