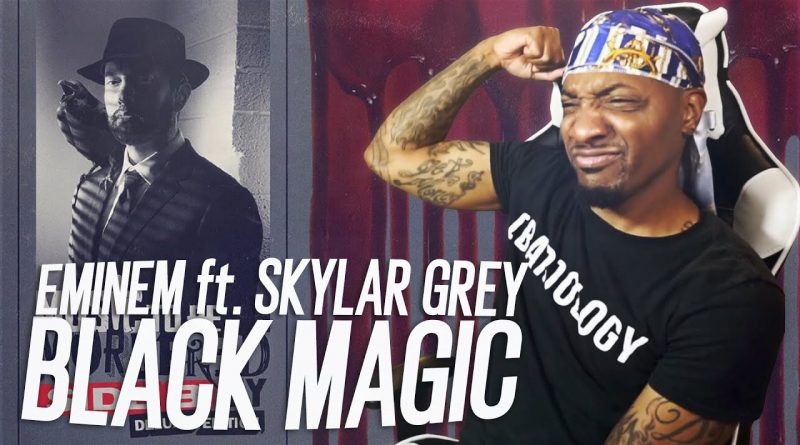 Black Magic is the latest song released by Eminem & Skylar Grey. Black Magic is from latest album named Music to Be Murdered By: Side B

Album – Music to Be Murdered By: Side B

[Chorus: Skylar Grey & Eminem]
Black magic, night walker (Yeah)
She haunts me like no other (Feel like)
Nobody told me (I don’t know) love is pain, oh (I know we just met)
Black magic, dark water (But it’s like)
Surrounds me like no other (It’s like I know you better than anyone)
She’s got my heart in chains
[Verse 1: Eminem]
We’re volatile, I can’t call it, though
It’s like too large a peg, and too small a hole (Yeah)
But she cheats and I catch her like the common cold (Sneeze)
Last time, I broke her collar bone, she’s intolerable (Yeah)
All I know is that the sex is phenomenal, though
We’re an unlikely pair (Yeah)
Like two different Nike Airs
But I’m the same size she wears (Jordans)
So I think we’re soulmates though (Yeah)
People don’t like us together, but like we care (Not me, not me)
Yeah, but God strike me dead (Yeah)
She knows that I would walk over hot coals
For her with both of my feet bare (Yeah)
But soon as I ask to hit (Ask to hit)
It’s like she grabs a switch (Grabs a switch)
And turns me over her knee
‘Cause my ass is whipped, yeah
And I got her back, but I’m spineless (Yeah)
So when she stabs me in mine (Yeah)
It’s like I just can’t feel the knife (What?)
As she pokes, jabs it, and slices
One minute, she’ll build me up (Up)
The next, she’ll push me ’round
Probably why she calls me “dumbbell”
She lifts me up (Yeah), then puts me down (Huh)
But I am under her thumbnail
I must be under her spell
It’s like lookin’ right into a gun barrel
But none of these hoes can fuck with my girl
She got that—
[Chorus: Skylar Grey]
Black magic, night walker
She haunts me like no other
Nobody told me love is pain, oh
Black magic, dark water
Surrounds me like no other
She’s got my heart in chains
[Verse 2: Eminem]
We wake up, break up, make up like Maybelline
Now she’s all made up like make-believe
Probably why she’s so fake to me
But what the fuck’s it gonna take for me to make her see?
Strip her naked and take her keys
I been plannin’ this day for weeks
But I can’t tell if I’m ‘wake or ‘sleep
But if this is actually happenin’, “sucker for pain”
I’m stuck in this radioactive pattern
But her by her motherfuckin’ hair’s
All I “imagine draggin'” (Dragon)
She lunges, attacks, and scratches
But I ain’t gonna stand for that shit
Like Kaep for the National Anthem
As I stab, I’m laughin’
So much for witchcraft and magic
Abracadabra that, bitch
No turnin’ back, I’m blackin’
As I say farewell to the love of my life, I cut and I slice
I give her one last hug goodbye
Wipe the blood off my butterfly knife
Watch her fuckin’ die right in front of my eyes
But in hindsight
Think I just wanted to see what her insides look like
As I pop another five Vic’s
That’s what this high’s like
Look down, there’s mud on my Nikes
Shovel at my side, blood on my mic

Now wake up to Music To Be Murdered By like—

Agatha All Along Lyrics – Kathryn Hahn